Here at MyAppleGadgets, we pride ourselves in keeping you on the up and up with all that’s new and cool over at Apple. Here are 15 cool iPhone iOS 10 features and some of these are going to dramatically change the way you use your iPhone, busting up long-term habits while attempting to make your life a little easier... so let's jump in.

The iPhone and iPad lock screen is getting a huge makeover. First, let’s have a moment of silence for the “slide to unlock” bar which is being phased out and replaced with a simple tap of the home button… Instead of seeing “Slide to Unlock” it’ll say “Press Home to Open.” By pressing the home button you’ll be prompted to enter your passcode unless of course, you’ve set up Touch ID in which case you’ll unlock your phone.

But about that “raise to wake” feature, just by lifting up the phone it’ll “blink” on so you can see any notifications on your screen.  This solves the problem many have had where just by accidentally opening the phone with Touch ID when their thumb hits the home button, they would blow right past any lock screen notifications without reading them.

2. Now your notifications are interactive

I love this new guy. Ok, so you know how notifications are pretty limited on the lock screen? Really all you’ve been able to do is read it, dismiss it or launch the app. But now you can respond to it right then and there.  Press down on a text and it’ll allow you to answer it right on your lock screen. And don’t worry, if you have any iPhone prior to the iPhone 6s you’ll still get this feature, 3D Touch or not.

The upgrade to notifications doesn’t stop there. There’s one other cool feature that might slip by but is very useful. Instead of clearing notifications one by one you can clear the whole lot with a simple hard press of the “x” icon in the top right for those phones with 3D Touch.

Boy, that heading has a lot of c’s. The Control Center has a slight redesign that allows for a cleaner more aesthetic flow. The bottom row of apps goes back to just 4 icons with the Night Shift icon getting its own piece of real estate just above.  AirPlay and AirDrop also get bigger spots above the Night Shift icon. All the other icons like Wifi, Bluetooth, Airplane mode, etc. remained unchanged in position but will now light up blue when turned on.

Now, I know what you’re thinking, “Where the heck are they going to fit the music controls?” This is Apple, they’ve practically built their brand on music so of course they’re not going to @#!* the bed on this. All you have to do is slide right when in the Control Center and you’ll get a whole new pane dedicated to your music with basic controls and even album cover art. 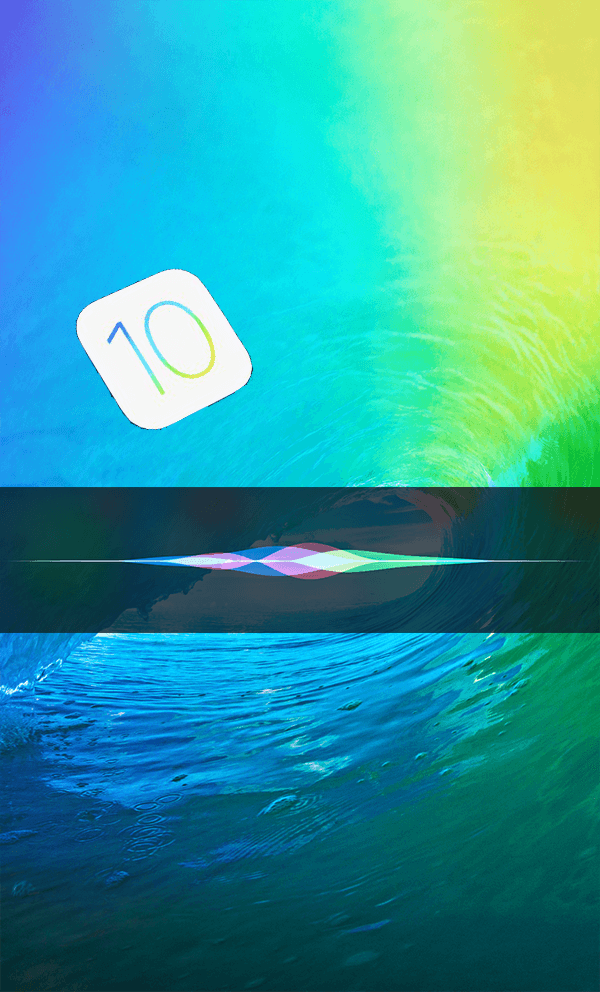 Apple announced that they are opening up Siri to third-party developers which is pretty huge and is line with a changing model where just last year they open sourced Swift, the iOS programming language.  With Siri now opened up she’ll be able to do a lot more like send a message through WhatsApp or a number of other functions with apps like Uber, Shutterfly, Pinterest and more.

Apple says Siri should make a lot less mistakes due to an intense API. Whatever that means. I think that’s technical jargon for “sucks a lot less.”

Siri will start influencing the intelligence of your keyboard by understanding the context of the words you’re using and how they fit into your overall sentence. What this means is it’ll be a whole lot better at suggesting words. Maybe this means it’ll finally stop thinking I want to say, “I hate this ducking autocorrect!”

I promise you, autocorrect, I never mean “ducking” and I’d appreciate you staying out of my ducking business.  There will also be an added button for you to send your current location when someone asks where you are.  Siri will being eavesdropping on your conversations when you’re talking about what to eat or when to meet up and will pre-fill Calendar events and add them to the app.

Apple Music has been in serious need of a redesign. It’s been hard to navigate through its ambitious yet nonuser-friendly display. The new design opts for more aesthetic choices with smarter colors and a cleaner flow.

They’ve added new features like the ability to look at lyrics of songs and previously downloaded music (you know, in case you forgot).

I’ll be honest, though I look at Apple News once in a blue moon, I’m still a Flipboard guy. Apple has got to convince me that the native News app is worth it to ditch my trusty Flipboard. Apparently that’s what they’ve trying to do.

They’ve cleaned up the app with a nice redesign much like the redesign of other Apple apps. They’ve also added subscriptions so you can see publications like the Wall Street Journal and National Geographic.  Breaking news notifications are being added so they’ll appear on your lock screen. Surprising this feature didn’t already exist.

8. HomeKit and the new app, Home

Smart homes are all the rage. All the kids are doing it. Go ahead, try it. With the introduction of the new Home app you’ll be able to control all of your Smart Home appliances and gadgets that are compatible with HomeKit. This will allow you to control them all from one central hub no matter what company they are made by - GE, Nest, etc.

Home will allow for special settings or what they call “Scenes.” These customized settings will allow for adjustments and changes to a number of your different appliances in one fell swoop. So let’s say you tell Siri, “Good morning”, Home will start turning things on like your coffeemaker, your lights, open your shades, etc.

Check out this video from one of our favorite "YouTubers" Everything ApplePro:

Remember when Apple Maps was a joke? A punchline for late night hosts? Well, the reason you don’t hear that too often anymore is because it’s really not all that bad after a number of major upgrades.  With iOS 10 they’re adding some additional slick features like cool animations and on-the-way traffic reports.

They’ve also opened up Apple Maps to third party developers. Think booking an Uber right in Maps as a possibility.  And can you guess what they’ve done with the design of the app? Yep, you guessed it. They’ve made it cleaner and simpler. Just like everything else in iOS 10.

Messages is easily the most used app in the iPhone so it makes sense that it would get some major attention in iOS 10.  There aren’t just a couple of tweaks to the app. Instead there are several major upgrades that make it a real competitor with Facebook Messenger and Snapchat.  Emoji’s are three times larger for a more in your face…face. You can write handwritten notes, text animations and entire-screen animations.

Messages literally come to life here. You can say something “loud” with large bursting print or say something nice and gentle with slow-to-show-up text. There’s even Invisible Ink where the message is blurred out until the recipient swipes over the text or photo so they can see it. You know, for added suspense.  There’s even a whole new app store dedicated to content that’ll spice up your messages like images, GIFs and a bunch more.

It’s been a long time coming but this rumored feature finally made its way into the iPhone. Voicemails are now transcribed so you can see exactly what the caller said without having to listen to it.

Now, I like the idea but I can’t help but think this is just another way for us not to have to actually hear another human voice forcing us to stare at our screens a little more. Oh well, maybe that’s just what the future holds. Additional cool features include being alerted when a call might just be spam and being able to answer any type of call from the lock screen like those from WhatsApp or Skype.

Photos is getting a bit more organized with a local feature, Memories, that creates albums for your photos based on facial recognition and a boatload of other computations like objects and scene markers.  So a bunch of trips to Disney World will be grouped into one album (as long as this feature works properly). Or if you’re looking for specific photos with your dog, Max, you can just look in the “dog” album.

13. RAW Images finally get some attention from iOS

For any true photographer RAW images are a must when taking photos. RAW images allow you to capture more details in the photo so you can have more room for editing later.  Well, if you’ve got an iPhone 6s, 6s Plus, SE or 9.7-inch iPad Pro you’ll have the option to capture your photos as RAW images as long as you use the rear-facing camera.

14. Now you can be more selective about read receipt

Remember when read receipt was introduced way back when and we all thought it was a great idea? Then we remembered that we constantly read texts that we had no intention of answering and it suddenly got awkward.

Well, now you can pick and choose read receipt for different contacts or groups. So let’s say you have a basic understanding with your wife that you’ll never answer her text that says, “Remember to pick up the kids from school.” With read receipt on she’ll see you at least got the message and read it.

iOS 9 greatly increased the number of tabs you could have open in Safari at one time to 36. But some of us find that too limiting. Believe it or not just the other day I wanted to open a tab and search for something new but couldn’t as I was at the 36 ceiling.

Now, Safari will allow for unlimited tabs (yay!) so I can obsessively open a new tab every time I want to search for something like “How many tabs can I open in Safari?”

So there you have it – 15 new iPhone iOS 10 features that will change the way you use your iPhone!  Let us know what feature in iOS 10 you’re most excited for in the comments below!